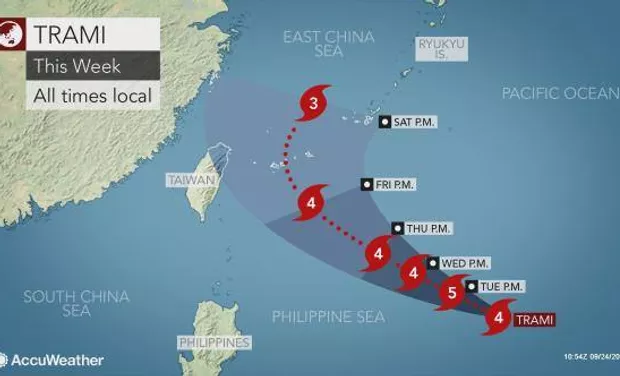 Tropical storm Trami which is currently situated to the southeast of Taiwan in the Philippine Sea, developed into a typhoon on Sept. 23, and has potential to affect Taiwan, the Central Weather Bureau predicts.

​Typhoon Trami is likely to influence Taiwan’s weather on Sept. 28-29, and the precise path of the typhoon is uncertain, according to CWB.

The typhoon was situated 1,700 kilometers southeast of Taiwan’s most southern point, and is moving on a northwest course at a speed of 17 kilometers per hour, the CWB said at 8.00 a.m. today.

​The U.S. Naval Meteorology and Oceanography Command also expects Trami to continue on a northwest course towards southern Taiwan, but it is too earlier to tell if the typhoon will directly pass over Taiwan.

As Trami moves closer to Taiwan, the CWB predicts the weather will sour towards the end of the upcoming work week, and rain will be increasingly expected.

​Typhoon Trami will bring rough swells and unpredictable waves to Taiwan’s southeast coast and outlying islands in the area from Sept. 24. The CWB advises people to cancel all water-based activities.

​We will keep continue informed of the information. If there’s any question, please don’t hesitate to contact with us.